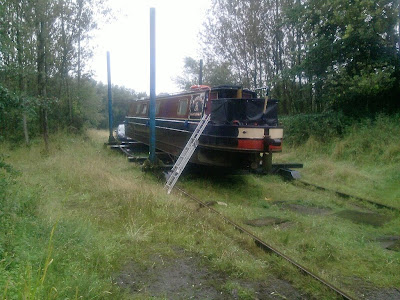 The first launch, on Friday, was the return of NB Dalriada to the clear-ish waters of the Forth and Clyde Canal. The shot above is the 'before' one - before she was pressure-washed, scraped, sanded and blacked with four coats of Intertuf 16 bitumastic hull paint! Living on her for three days or so in the week, at an angle of 16 degrees from the horizontal, was interesting. You fall faster as you walk towards the stern, and climb as you walk forwards! The engine would overheat after two hours running with radiator immersed in air rather than canal water, but that's long enough to top up the batteries so the basic systems will work.

Four coats on, looking rather neat and tidy, three days for the whole thing to fully cure, and she was ready to go back in on Friday. Mary came and crewed for me, once the kids were dropped off at school. Tommy (from the Forth and Clyde Canal Society - stars all!) winched us back into the cut, we dropped a line around the upwind bollard and Mary part held, part paid-out as we turned her against the wind so we were pointing back up the cut towards Kirkintilloch and the marina. The wind was a little interesting getting back into the marina, but we slid gently back in beside NB Twizzle and tied up with barely a scuff on the new blacked paintwork.

All in all, a satisfactory process. The frustration (or enjoyment if you like that sort of thing) is repeating the whole blacking process again in two or three years' time. Dalriada has been out of the water twice in 2010 - this time, to be blacked, and when she came out to come north (see further down this blog). Boats don't much like being out of the water. Land is not the true environment for them!

The second launch - in about 3 weeks' time - we will be popping along to Govan to see Duncan, the sixth (and probably last) Type 45 destroyer be launched. A slightly different scale of event - and she will have needed a little more then 20 litres of hull paint to black her boot topping! But I'm sure she's ready to take to her natural environment too!

Duncan at Govan
Posted by Bishop Andrew at 05:23 1 comment:

Getting Mary connected with her own netbook seemed like a really good idea. Partitioning the Outlook accounts so the 'family' one only goes to her machine (duly backed up when I get round to it on the external hard drive) seems logical. Making sure the shared folders work (give or take) across the mixed Vista/XP network seems OK. It's all part of the evolution of our family network (I didn't think I'd be typing that a few years ago), as the ancient (i.e. 5 year old) laptop won't even run with Ubuntu...

But is it so good when we are sat together on my day off, putting off the jobs we should be doing, tapping at our keyboards within a couple of feet of each other? We are not e-communicating with each other, or Skyping across the same room (must get Skype fully set up!), but the image to the beholder would be one that is alarmingly technologically separated!

But is it so separated? With a network of friends scattered thinly over the world and thickly over the United Kingdom, real human relationships can be maintained or even intensified through the lens of technological relationship. I have met others who have found (and I have personally experienced) the intensity of virtual-only friendship, the blurring of the boundary of posted knowledge and face-to-face encounters. And (as I feel duty bound to do) I must reflect on the presence of God in these 'non-places.' Wherever people meet, share their lives, feel pain, ask the big questions - God is there to be encountered. Sacred places easily include internet-based space.

...and I still smile at an online debate on sacramentalism online - does the bread and wine get consecrated on a table in Australia if the president says the words in a study in Oxford, but both worshippers are present in a chat room hosted in ... who knows where?
Posted by Bishop Andrew at 02:47 1 comment: