We have an Advent Evensong in Holy Trinity Dunoon this weekend. Musical talent is being imported in to assist with the choral elements, a piece has been written especially and we (nearly) have the order of service ready to roll.

A reflection on my input to the process? I am sufficiently musically inept (and our organist more than sufficiently not so!) to not try and risk too strong an input there.

So the liturgy is mine.

Prayer Book evensong - as it done. The bits missed out that one misses out, the bits added in that one adds in. Download of the text to get it all started.

But a process is needed - which is a variant of one I still find myself doing regularly.


So Catholick becomes Catholic. An extra 'Let us pray' appears. Do they matter?

Well, yes, they do. Otherwise why does any of it matter?
Posted by Bishop Andrew at 14:04 No comments:

What do clergy do on their day off? 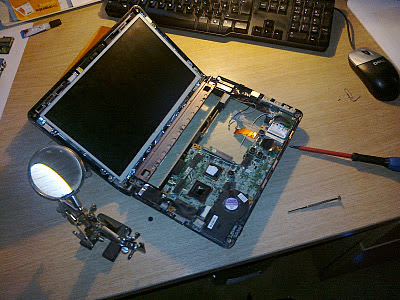 Hang gliding? Reading non-orthodox theology books? Lying in a sensory deprivation tank whilst whale-song is played through a set of noise cancelling earphones?

All sorts I suppose.

Today I took the guts out of eldest daughter's netbook, tried my best to solder the cracked power connection (I give a few days before it needs doing again - my soldering iron is getting on a bit, as am I) and checked the run of the screen feed cable for snags and cracks. It now seems to be working.

So what do clergy do on their day off? The same sorts of things that ordinary people do on their days off. Because we are just as ordinary as everyone.
Posted by Bishop Andrew at 06:29 2 comments:

Labels: Argyll and the Isles, clergy training, ministry, time off

At the going down of the sun

This week many clergy will be involved in two remembrance services (or possibly more). Friday the 11th November (at 11am) is the increasingly popular 'literal' time of remembrance, the time of the armistice coming into effect at the end of the 'Great War' in 1918: the 'war to end all wars.'

I detect a considerable degree of ambivalence amongst clergy (and others) to remembrance. The wearing of white poppies flurried whilst I was at theological college. There is a heartfelt reluctance to engage with any romanticized image of war. It's all about peace, isn't it?

Where am I on it all? My short career as a regular serviceman was in the cold war. We trained for the end of the world, running about in suits and masks and pretending to plot the wind-blown course of mushroom clouds. We travelled about the world not being shot at, looking under our cars for Irish not Afghan bombs. It leaves you conscious of what has gone before, and what your successors (in a VERY different world) are doing now. I joined the armed forces, in part, through a fear of nuclear armageddon, and the thought-through response that maintaining detente would prevent that war. Others marched against nuclear weapons - fair enough. No-one knew that economic and political frailty in the east would close that stand-off down, and allow the world to boil up into what it is now.

The political context of participation in war is complex. I think that's a polite way of saying that it often stinks. Whether it's Blackadder's 'moving General Haig's drinks cabinet 6 inches closer to Berlin,' or regime change dressed up in UN Article 51 'anticipatory self defence' as in Iraq (and others?), the global political motivations for entering war can be rather murky.

But the personal experiences and sacrifices that individual men and women in these conflicts make are undoubtedly deeply moving and powerful testimony to much that is fine and noble in humanity. The irony of wasteful, destructive war and the broken beauty of humanity are a rich, intertwined theme in remembrance. Who really cares about European politics in the early 20th century? But we read Wilfred Owen and can be affected by distant memories of mechanical horror.

In a century, who will care about the 'War on Terror' or 'Al Qaeda' or the rest of it? But will they remember limbless young people rebuilding lives and coffins driven slowly through Wiltshire? Maybe.

So I will wear my poppy on my choir dress on the seafront at Bute as we say Binyon's Words and the Kohima epitaph. My fellow British Legion members will parade, some crying.

And we will remember them.
Posted by Bishop Andrew at 12:23 1 comment: