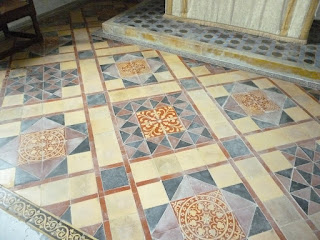 The tiles in the sanctuary at Holy Trinity.  Why post a picture of them?

I spotted a conversation on the SEC Facebook-o-sphere about what colour carpets should be used in a sanctuary.  In one as damp as ours - transparent and non-existent is the only sensible option. I feel I'm too new to the SEC to launch in to jolly debates about gold/purple/blue (I have blue on Bute). But we have these tiles, slightly tired-looking as they are.

The lack of carpet means cold feet in the winter-time, even through soles of ones shoes.  It also means clicking and clacking as the servers walk about.  It means a ringing, sharp acoustic in this end of the church.
But that means that the voice of the priest, facing the east wall (our stone altar is rather firmly fixed there) is picked up and carried back to the congregation.  I believe I am easier to hear facing the wall than turning and speaking directly - the resonance of the tiles, the wall, the window, the head slightly angled (as I was trained) to ensure reflection of sound - it all seems to work. The fabric and space that we use for worship can resonate and send messages out beyond even the walls, into our communities!  That's being missionaries in the 21st century!

And the tiles themselves: what changes they have seen since the 1840s when they were put in place.  Changes to the church, and to the world outside!  Apparently the humble tiles also matter: I was telephoned not long after arrival, by an academic of the encaustic tile society (or something like that) to ensure that our significant Victorian encaustic tiles were still there.  Which they are.

So maybe it's worth posting a picture of some tiles every once in a while!
Posted by Bishop Andrew at 03:27 3 comments:

So what exactly are we doing, trying to be a church?

Are we people who have a truth to share with others?
Are we builders of communities?
Are we spiritual guides, advisers and companions?
Are we holders of old traditions and creators of new ones?
Are we voices that cry out against injustice?
Are we hands that work to make things better now?
Are we owners of hope when things seem hopeless?

I'm not sure a narrowboat moored in the centre of Kirkintilloch qualifies as a 'wilderness' location but there are certain parallels.  Today is my post Easter Sunday off - a month or so after Easter Day - and I'm sorting stuff out.  The deck scrubbing and red-oxiding of rust spots on NB Dalriada is waiting while I sort out my technology.

As an Episcopal priest with a massive 'canonical area' (denominational parish) I spend a lot of time out and about, often in breathtakingly beautiful locations, often miles from anywhere.  I also spend increasing times on the island where my house is not.  Mary also runs her holiday business from these places.  And a narrowboat moored in Kirkintilloch and many other points on the canals.  Selling holiday lets, keeping in touch with colleagues in Scotland and elsewhere, and also an increasing amount of pastoral work, demands connectivity and, for me, the use of Skype and now also Google+ hangout videoconferencing.  But all that needs connection and a place.

Remaining connected is important.  I am not a cutting edge technology person - I use it when it's useful and ignore it when it's not.  But this week my rather ancient Nokia's screen finally reached the point of unreadability due to scratches - it was a keypad phone, 3G but only just.  This phone has been the nerve centre for webmail, map browsing, Google etc. for the two years ministry/Spinnaker View running in Scotland.

So this morning, I am sorting some of this out.  A little bit of shouting at our 3G provider produced some improved contracts for the kids' phones, and a conciliatory Android smartphone, which I have (reluctantly) switched to.  The pain of learning a titchy touch-screen's keypad will pass, and I am far too tight to buy a tablet.

And now I have the warm glow of things coming together.  A modest 'add-on' on my 3G contract allows the new smartphone to be a wireless hotspot (and my Aberdonian roots like a mere one month rolling contract!).  The resurrected netbook (new motherboard from ebay), D2's iPod touch, all the data hungry devices, all of this is suddenly connected to broadband while we are tied up in the marina! Skype and videoconferencing (within data reason) suddenly beckon wherever 3G signal is to be found.

Which still raises issues with wilderness.  The old definition of wilderness (used in Duke of Edin award hiking planning etc.) was to do with distance from habitation.  The new definition feels like distance from suitable electromagnetic comms bandwidth.  And we still have some battles to be fought there in the hinterlands of Argyll and Bute.

But let me bask a little in the glow of satisfaction as I blog via my new portable wifi hotspot.  The frontier of my personal EM wilderness has been pushed back a little, here in wild Kirkintilloch!
Posted by Bishop Andrew at 04:38 1 comment: