Aware of our context? 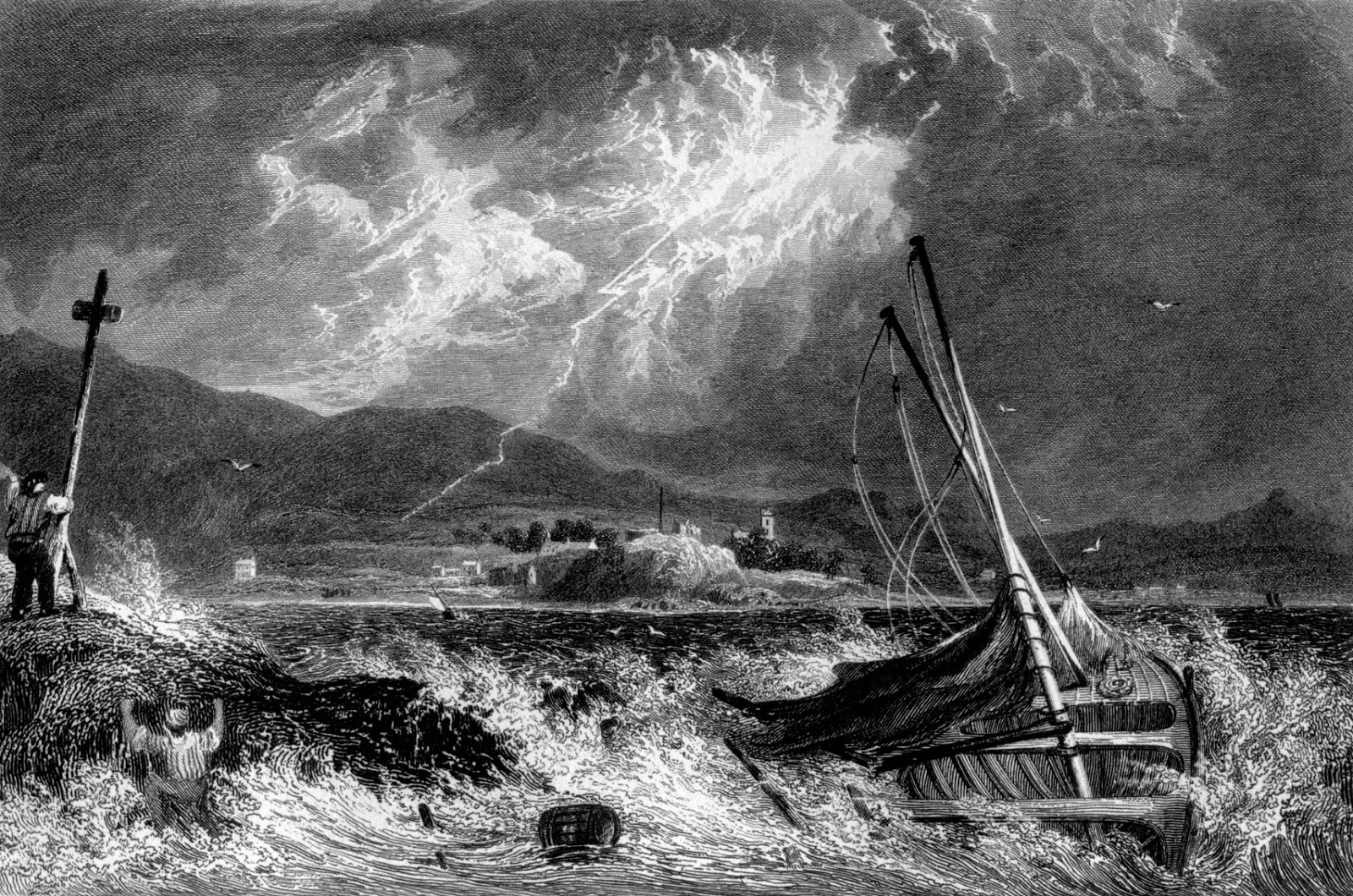 This is an 1830s engraving of a shipwreck off the coast at Dunoon. The sailors are clinging to the marker on the rocks, the same rocks that have destroyed their ship, presumably running for shelter in one of the bays of Dunoon.  The wind direction looks a slightly unusual easterly, given the prevailing winds here are generally westerly of some nature.  The storm is really getting up, with a sharp stab of lightning cracking down on the hills above Dunoon.

I saw this print (in an original printed form) in the house of the lady who lives in the white house you can just see to the right of the sailor-festooned rocks.  Her house pre-dates the row of hotels and houses that grew along the West Bay in the later Victorian times.  Her house also pre-dates the church that I am part of in Dunoon: in fact the crack of lightning is hitting just about where Holy Trinity was built, some twenty years after the print was made.  I don't think one should read too much into that - if it was dated 1850 (the website I bought the image from lists it as 1830) - it could be seen as a presbyterian critique of the permission given for a Scottish Episcopalian building in the burgh. But no, it's just a rather romanticized vision of a late 18th century shipping disaster, a not unusual happening at that time, I suspect. The lady with the print is rather delighted with the historical rooting of her house. She is also the head of the local heritage society, and was vetting me before allowing me to address the same society.

The context that hit me hardest from this print is the rocks.  They are the Gantocks, a set of rocks visible at low tide, just off the pier in Dunoon.  At high tide their beacon is always visible, normally capped by a seagull or two, or a cormorant drying its wings.  The Gantocks are always there.  They are there in the image that heads this blog, a photo taken a few months before I had even arrived in Cowal, and when there was still some uncertainty as to whether I would come or not.  The idea of the Gantocks as a thing of danger are still there, I suppose. The MV Akka sank on them in 1956.  The paddle steamer Waverley almost ended her career on them in 1977.  A lump of rock in a shipping lane is always something that matters.  But living here, you become unconscious of them.  Occasionally the light makes them stand out, or as you drive past the (shut) McColls hotel they jump out, shouting, "very low tide!"  But mainly they are just there, as they always have been, and as they always will be.

Context is where we minister, where we live. Sometimes we are aware of it. Sometimes we learn the stories of its past. But it is always there. Everything is context.
Posted by Bishop Andrew at 08:04 No comments: