Our fourth year in ministry in Argyll and The Isles is picking up speed. This week we kept the feast of the Blessed Virgin Mary, on two different days in the peninsula and on the island.  I have a clear, clear memory associated with this feast, abbreviated to 'BVM', as the first 'official' feast that we kept at Cuddesdon theological college, pre any term starting but as the waifs and strays of ordinands and their families gathered together wondering what was going to happen to them.  Morning prayer in the chapel (the second one at that Oxford college, and presumably now superseded by the King chapel) was a rather home grown affair and we tried to behave like 'proper' vicars, I recall.
Now eight years on (a short time by any standard, but a time) I wonder how those folk are exploring the same wondering about what will happen.  I keep up with a few, and a few more float past on Facebook.  One or two from about that time are no longer in ministry, most are now incumbents scattered around England and Wales and Mexico and elsewhere.  But what will happen?
Will people be shown a way of meeting God?
Will it be about people flourishing and being shown how much they are loved?
Will it break down barriers and prejudice?
Will it show people how much that man, from 2000 years ago and today, really, really matters.
I wonder what will happen? Posted by Bishop Andrew at 02:04 No comments:

Glottal stops were all the rage when 'e were a lad...

The rain falls in straight dense lines outside the early morning window, obscuring the soaking foliage of the lime trees.  August in Argyll. At least the midges will be grounded.

No blogging in July, a holiday month but a busy month.

And I'm glad that the rain was not this Argyll monsoon two days ago, as some of the Swift side of the family gathered in St Helens, Lancashire, to bury my father's ashes in a family plot in the catholic graveyard in Sutton.  The priest who celebrated the requiem mass said in his reflection,


"He went from Scotland to heaven via Sutton."

The bald simplicity of that was rather shocking, and wasn't something that I would find myself ever saying in that sort of context, but then I'm not a catholic priest.  On a facetious level, a Scot would also observe that such a theologically distilled journey was also a very long detour to get back so close to home, etc. etc.

The whole occasion was quite striking.  I have never been to St Helens before, even though this was the place of my father's childhood and adolescence, and he always had a rosy, soft focus perspective of the eighteen years that he spent there, eighteen years that ended with his departure for university (nearby, in Manchester) and also the death of his mother and his entry into orphanhood.

Well, now he has joined Charles and Sarah Swift, both dead in their fifties in the fifties.

Even that was complicated.  I suppose I have developed a clergy antenna for 'things-that-could-wrong-at-funerals' and it was twitching like mad as I arrived. After the Scottish party had had dinner with my aunt and uncle, I slipped over to the graveyard to make sure all was well.  We had a muckle big wooden casket, about a foot long, which, it transpired, my mother and sister really, really wanted to have buried.  I had rather supposed that we would get away with infusing ashes into the grave, pouring them from the urn into a hole.  I was used to a fair sized hole for this pouring process.  But if the casket was to go in, it might well have to be a bit deeper.

In Lancashire, or in Sutton anyway, it seems that a hole about the size of a tin of beans is sufficient for the resting place of the cremated faithful.  Quick call to the priest, then a quick call to B&Q for a shovel, and I dug out a hole in the iron-hard urban earth to take the casket.  A couple of inches deeper in the morning (thanks to George my brother-in-law) and it looked OK.  All rather Father Mackenzie from the Beatles track 'Eleanor Rigby', I walked away from the grave wiping the dirt from my hands.

All went well, the thurible was swung a little, the asperge did its thing. The priest coped with no questions or preparation beforehand whatsoever with great aplomb and style.  The slight oddity of Scottish cords attached to the casket was rather useful, as the family members were able to lower the casket into the rather deep hole with grace and no scrabbling on the ground.

We then retired to Widnes for Marks and Spencer sausage rolls and cups of strong tea.

And it was mercifully dry, in Lancashire, returning a man to his home. 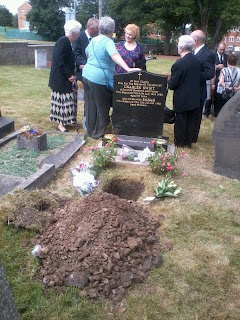