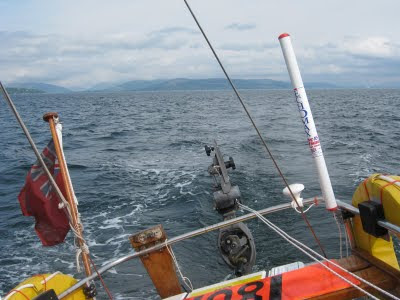 At last, after nearly a year on the west coast, I managed (with son) to get afloat in something not driven by a diesel engine (well, not all the time) - we went sailing!

Gordon (a serious, many decade experienced sailor) was the skipper, and Pete and I were, well, ballast.

Not so much wind about - a squall or two got us up to a little bit of speed between Cumbrae and Bute - but the sense of water fizzing below the hull and the angle of the world aboard Tantina II were exhilarating!

Do you think we will get hooked? Maybe not, but it was great to be one of those little white triangle flying up and down the approaches, rather than just looking out at them!
Posted by Bishop Andrew at 01:22