Nothing makes a difference... 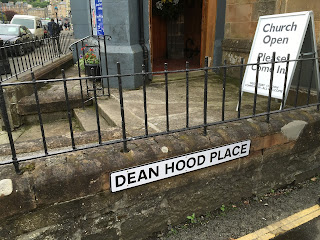 A very, very small, almost trivial thing happened the other week. Nothing was added. And it made a vast, vast difference.

The small Scottish Episcopal Church on the Isle of Bute, St Paul's Rothesay, has been present in that community for getting on for 190 years.  The current rather bijou Victorian chapel-style church is from the 1850s, but they were in living rooms and temporary buildings for a bit before that.  This was one of the missions of the Episcopal Church (once no longer illegal and suppressed) to reach out into parts of the Scotland that needed to hear the gospel, and needed to hear the gospel wrapped in the subtle, nuanced way that only a balanced ministry of Word and Sacrament, as exemplified by Episcopalian/Anglican worship, can do. That's the driver behind a great deal of our Victorian expansion.

Churches like St Paul's are never going to be 'mega-churches' the way that city centre churches can aspire to be.  Set in an island community of maybe six thousand people, it has had glory days of Sunday schools and fuller pews (well, probably) - but there is a confidence about St Paul's presence on the sea front in the resort town of Rothesay.

So where does the nothing come in?  What difference does it make?

Well, in 1838 (don't you love church blog posts that start that way...) In 1838, a clergyman from Dundee was appointed to be the rector of St Paul's in Rothesay.  There was no building, no church as such, just a few people who gathered week by week to worship.  Samuel Hood built up those people into a church.  He was the dean of the diocese too.  Within fifteen years he built a wooden church, then laid a foundation for a stone one, then built that church.  He was a classic church planter, as well as operating as the dean of a diocese that stretches from Lewis to the Mull of Kintyre.  He is buried in Rothesay, in the main graveyard by the old St Mary's chapel and the High Kirk (now the Church of Scotland United Church of Bute).  Dean Samuel ministered on the island and in the diocese for 34 years before he died.  He is a founding father of our church in Argyll and The Isles, and also a founding father of modern Rothesay, which he will have seen grown around him as he grew his church, celebrated the sacraments, ministered to the people. 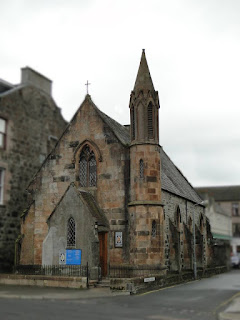 But the nothing? Yes, I'm getting there...

After his death, he left more than a church community and his memory.  He left land and funds for a shop and a hall, to be built beside the church he founded.  This hall and shop is still part of the mission of the church today, nearly 150 years on.  And the street that the church, shop and hall created was named after the man who left the land.  Dean Hood Place: a Scottish street, named in honour of that Episcopalian founder.

When I arrived on Bute in 2010, I spotted something strange.  At some point in the past a council employee had made an error in transcribing street names.  The sign by the entrance to the church said, 'Deanhood Place'.  A place named for the abstract concept of a dean? Or the fact of being a dean?  Custom and practice had set this error so firmly in place that documents, leases, all sorts of 'official' matters now referred to 'Deanhood Place'.  Having checked that the official database is correct (which it is), I tried, rather half heartedly, to contact the council to try and address this, but to no avail.

Wind the clock on seven years.  Much has happened, and many relationships formed in Rothesay.  The church has changed, things have developed. Wonderful things have happened, painful things have happened.  But the little church community of St Paul's has matured in many ways.  Old Dean Hood is often thought about and talked about, and a chance conversation between Margaret, the vestry secretary, and Provost Len Scoullar, of the local authority, suddenly causes things to happen.  The issue is raised.  A founder of Rothesay has been lost! This feels unjust.  Something should be done...

And it is. Nothing, a space, a gap, is added to the sign on the street by the church.  Malcolm, the Rothesay sign man, prints it off, and with little or no fuss, the name of the street is restored to 'Dean Hood Place.'  Samuel is back in his place of remembrance.  The old Dean, from so many decades ago, is remembered again.  It will take a long, long time for 'Deanhood' to slowly slide from usage, and Samuel to be everywhere again, but for the moment, the insertion of that 'nothing' has made all the difference.

A church planter, who grew a faith community in Rothesay as their context developed and flourished, is restored to his rightful place in society. Does anyone walking past that street name wonder who 'Dean Hood' was? Probably not.  But the work of proclaiming the gospel in the west of Scotland goes on, and his restoration on our townscape is a great encouragement to those who follow Dean Hood in that mission today.  Nothing really can make a huge difference...
Posted by Bishop Andrew at 05:07